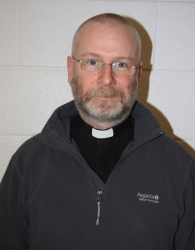 Chris is vicar of the parish of St John and St Barnabas Belle Isle and he also looks after the parish of St Mary Hunslet. He was ordained priest in the Anglican Church in Wales in 1994 and has served most of his ministry in Wales, both in the rural North and in Cardiff. He has also worked for the University of Manchester as a tutor in Social Sciences where he maintains an active academic involvement. He moved to Leeds in 2012 and in addition to his church duties he is a foundation governor at St Mary’s Church of England Primary School in Hunslet and trustee of the South Leeds based charity Health for All. He is also involved in the organisation of South Leeds Foodbank.

Chris became chaplain of Hunslet Hawks in 2014 and is supported in his role by Sports Chaplaincy UK which aims to promote and resource chaplains in sports clubs throughout the country.